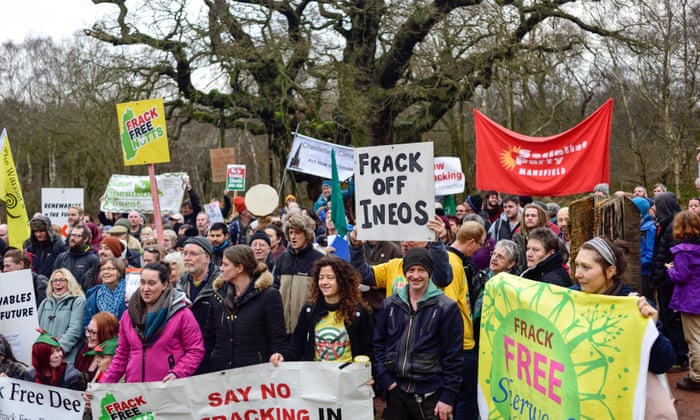 A multinational firm has backed down and disclosed a legal document that it used to justify a controversial sweeping injunction against anti-fracking protesters.

Ineos, which aspires to become one of the UK’s major frackers, had refused to disclose the document after it had been requested by the Guardian under open justice guidelines. However the petrochemical giant has reversed its stance and handed it over to the newspaper.

The document – drawn up for a public court case last month – set out the firm’s arguments for the continuation of the temporary injunction which covers all campaigners protesting against Ineos’s fracking activities.

The injunction tells protesters that they may be jailed, fined or have their assets seized if they obstruct the firm’s fracking operations. The injunction is being challenged by two campaigners who say it is “draconian, anti-democratic and oppressive”.

In the document, Ineos argues that the injunction is necessary to restrain campaigners from mounting unlawful protests against the firm and its suppliers. It says that it is not seeking to stifle campaigners’ lawful and democratic right to protest.

The firm says that it faces an “imminent and real” risk that it will be subjected to unlawful protests.

In the document, the multinational describes a series of posts on social media that it says means the risk is “heightened” and displays “a significant degree of hostility” towards Ineos.

The multinational says it has already been subjected to unlawful protests such as trespass and criminal damage.

The document was submitted to the high court for a public hearing last month. Ineos had hoped to persuade a judge to make the temporary injunction permanent. However two anti-fracking campaigners, Joe Corre and Joe Boyd, decided to challenge the injunction. Corre, the son of the fashion designer Vivienne Westwood, has accused Ineos of using “disgusting bullyboy tactics” against protesters.

The injunction had been granted on a temporary basis in July by a high court judge following an unpublicised hearing which gave no campaigner the opportunity to object to it at that time.

At the public hearing on 12 September, Mr Justice Morgan extended the injunction until November when there will be a three-day trial to decide whether to make it permanent.

On 13 September, the Guardian asked for a copy of the legal document, known in legal circles as a skeleton argument. The newspaper argued that the skeleton argument was now a public document as it had been presented to the judge and aired in court.

Ineos refused to disclose the document, arguing that while it had been referred to in the open hearing, it did not mean that it was a public document. It added that the document did not address all the issues in the case which had been adjourned.

In a series of exchanges with Ineos, the newspaper argued that there was a strong legal presumption in favour of open justice to enable the public to understand and scrutinise the justice system.

The Guardian added that documents referred to in court hearings should be given to the media to help explain to the public what the case was about.

Ineos later argued that, while it believes in the open justice principle, disclosing the skeleton argument would only confuse the public as it had been superseded since the firm intended to present a revised argument to the hearing in November. Last week Ineos handed over the document.

Campaigners have been organising determined protests against the fracking industry which has low public support, according to government polling.

The outcome of the injunction may influence other corporations to use similar legal weapons against campaigners who object to their activities.